ZURICH—Last year, film producer Aashish Singh was planning overseas shooting for his Mumbai studio’s latest epic, the tale of an amnesiac bomb disposal expert and the sweetheart he can’t quite remember.

In one scene, the lovers soar into the clouds and croon in each other’s arms, a Bollywood motif commonly dubbed the “Cut to Switzerland” because so many montages have been staged in the country’s picturesque mountains. Mr. Singh’s crew, however, opted for London rooftops rather than Alpine glaciers.

Audiences today “like films a bit more real,” says Mr. Singh, who works at Yash Raj Films. He says in this instance, money wasn’t a factor—though Bollywood filmmakers have generally been put off by the increasing price of filming in Switzerland. “Everybody likes to save money,” he said.

For reasons both artistic and financial, there has been a plot twist in a relationship as enduring as those at the heart of Bollywood romances. Switzerland has been Indian cinema’s A-list destination for movie interludes since the 1980s, when over-the-top duets set in the Bernese Alps were featured in genre hits like “Chandni.” Since then, hundreds of Indian film crews have slipped on parkas and made the 5,000-mile trek from packed Mumbai to Switzerland’s snow pack. 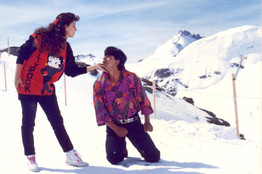 In the 1993 film ‘Darr,’ a couple dances out the door of a home in India and emerges in Switzerland. Yash Raj Films Pvt. Ltd.

Now, other locales are driving a wedge between Switzerland and Indian production crews as they try to capitalize on Bollywood demand for saccharine serenades. Some destinations, like the U.K., offer incentives such as cash rebates. Others, like the Himalayas of Kashmir, are simply closer.

The interlopers are getting help from the changing tastes of Indian moviegoers, who continue to value starry-eyed interludes but want to see them better meshed with a realistic story line or staged in new places. Some producers say they are scouting for new foreign locations because Switzerland’s snowy peaks and lush valleys have been featured in Bollywood love stories so often they are now clichés.

Romantic dance numbers are “more likely to be on Trafalgar Square than on a glacier,” says Urs Eberhard, a Switzerland Tourism executive, who has worked with Indian film producers in the past. Bollywood film shoots in Switzerland have dwindled to about two or three per year compared with more than a dozen annually during the 1980s and ’90s, Mr. Eberhard says.

The late director Yash Chopra introduced his audiences to Switzerland in 1985, shooting chunks of “Faasle,” a story of forbidden love, in the Alps. A later movie, 1989’s “Chandni,” established Switzerland’s mountains as the go-to location for Indian cinema as the movie chronicled the ordeal faced by a helicopter accident survivor and his beloved, who sing and dance their way through snow-capped mountains and verdant valleys.

Akin to a dream sequence, a typical Cut to Switzerland abruptly whisks the protagonists of a movie away from its story line to frolic in a vivid setting. Many montages feature elaborate dance routines and costume changes that put the most ambitious music videos to shame. Eventually, the sequences became so popular, Bollywood producers considered them de rigueur.

“If you had a good budget, you did it,” said Rachel Dwyer, a professor of Indian cultures and cinema at SOAS, University of London. She calls a scene in Mr. Chopra’s 1993 film “Darr” that involves a couple dancing out the door of a home in India and emerging in a Swiss meadow as “the sort of classic case.”

Switzerland’s success with Bollywood didn’t go unnoticed by other locations, many of which eagerly rolled out the red carpet to entice Indian producers.

About seven years ago, Film London, the agency that supports shoots in the city, journeyed to India on a trade mission and made a concerted bid to lure Bollywood filmmakers, according to spokeswoman Colette Geraghty. Now up to a dozen Bollywood productions shoot in the city every year.

Few locales have tried to woo Bollywood more than the Tirol region in Austria, which plies Indian producers with financial incentives and can also pitch “the same mountains and lakes” as neighboring Switzerland, says Johannes Koeck, who heads the Cine Tirol Film Commission.

Mr. Koeck is so eager to accommodate Bollywood producers he will oblige their most unusual requests.

With a crew in the area to shoot the story of an inept secretary’s forbidden love for an actor, Mr. Koeck says he was assigned to rustle up a troupe of lederhosen-wearing dancers for an early morning shoot after a last-minute addition to the script. He dutifully roused a local folklore group, although when the groggy members showed up to perform they were told the shoot had been scrapped.

On another set, Mr. Koeck rode a cable car down a mountain to retrieve a coconut Bollywood filmmakers had forgotten but needed for a traditional ceremony performed before a shoot could start.

“It’s kind of a challenge to ask for coconuts on a Tirolean glacier,” Mr. Koeck says.

Mr. Eberhard, the Swiss Tourism executive, says that Indian film crews are missing out if they skip Switzerland for Austria, which doesn’t offer “the same majestic or impressive range of Alps.” Still, he acknowledges Bollywood crews are willing to walk away if they don’t get the star treatment.

Ashwin Merchant, an official with Swiss Business Hub India, a group that promotes trade between the countries, has advised filmmakers shooting in Switzerland. He says Bollywood film shoots tend to spend lavishly when they are in town. That makes it difficult for him to understand why Switzerland isn’t wooing productions with financial help when so many other countries are. “Everyone’s jumping in,” he said.

—Preetika Rana contributed to this article.